Partly based on the project Money in vivo

Featured in Interspecies Futures, At the Center for Book Arts, New York 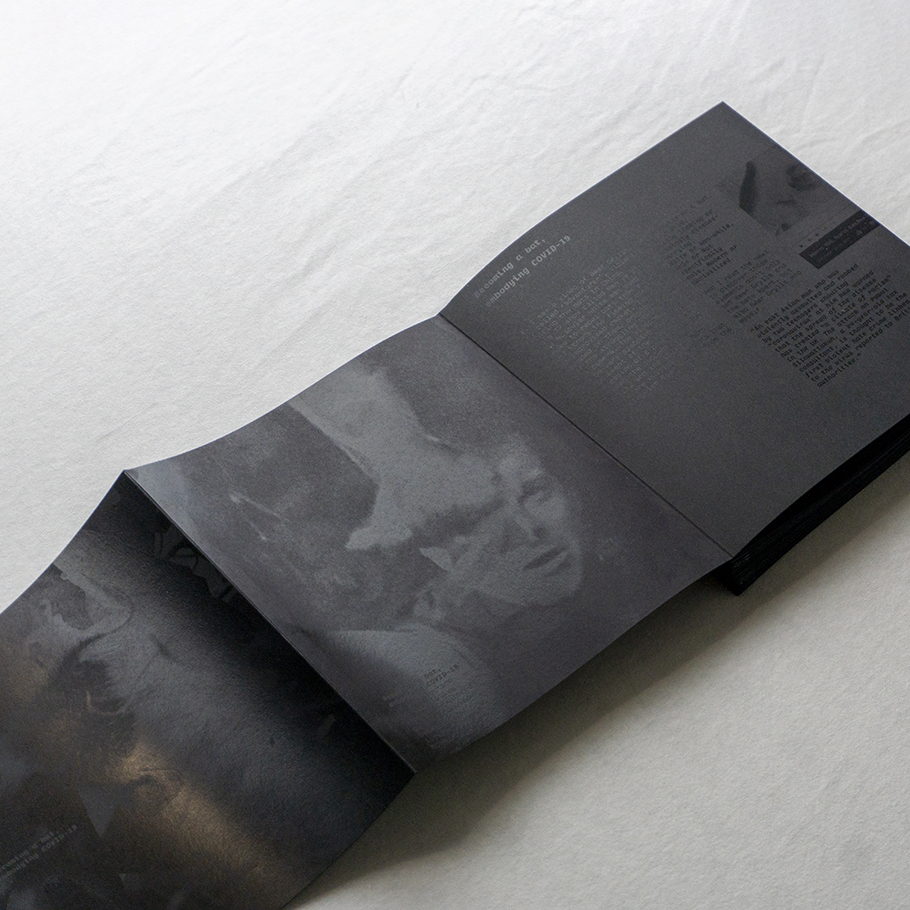 "Becoming A Bat, Embodying COVID-19 (2021) by designer/artist Noam Youngrak Son features black ink printed on black paper in a deliberate effort to be unreadable. However, the raised surface of the cover is meant to be inviting to bats who have low vision, but sense shapes through echolocation. The maligned bat of the pandemic is re-valued so that its non-human sensory orientations offer instruction for survival, while also highlighting its own set of minor intimacies, including and especially those with viruses."
The Brooklyn Rail 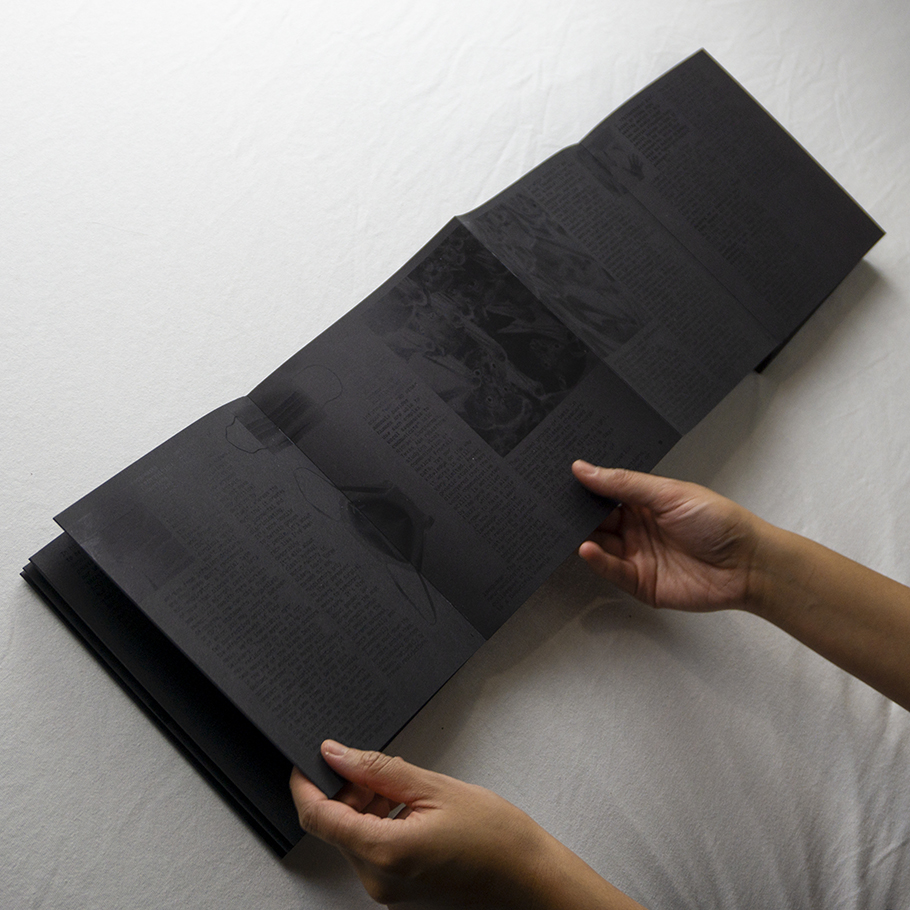 The publication begins with a written trace of the fictional thinking to fight the fear, helplessness, and anger about the political stupidity that the pandemic unveiled. The author started writing it when the first case of COVID-19 infection was reported in the Netherlands, by witnessing a surge in hate crimes against Asians followed by the global spread of the virus.

“I saw a video of Bear Grylls, so-called ‘adventurer’, violently hunting the bats in China, in a TV show called Man vs Wild. The muscular white man used smoke to repel bats from a cave and struck the fleeing bats with an improvised racket. Then he stomped on them, proudly showed off the struggling creature to the camera. The video appears to be very symbolic since the main event of the video is an expression of the power relation between the subject, Bear Grylls, and the object, bats. There are multiple elements that distinguish Bear Grylls from the bats: Bear Grylls or Bat, Man or Wild, Healthy looking or Seemingly disease-carrying, White or Non-white, Male or Not specifically male, Modern or Uncivilized.”

The author playfully jumps between various concepts as an attempt to deconstruct interracial, intercultural, interspecies prejudices, starting from their thoughts on becoming a bat, a species that is accused as a source of virus, and often referred as a xenophobic insult. From that point, after touching more interspecies agents including, Bear Grylls, Dezeen, Bill Gates, Lichens, Bacteria and bacteriophages, Mitochondria, the essay return to the topic of COVID-19 and concludes with questions that redefine the human-coronavirus relationship. 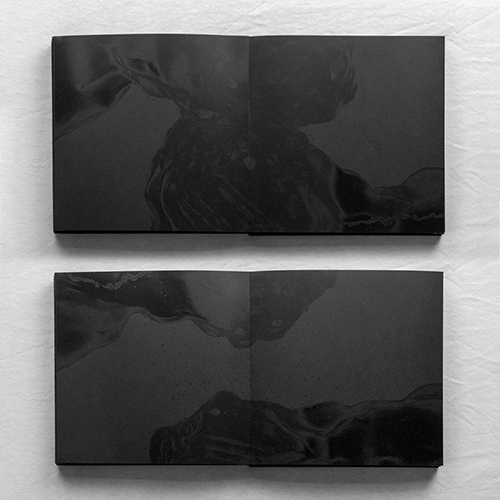 “We all already have an embodied experience of forming an endosymbiotic relationship with bacteria. Why not form a similar relationship with COVID-19? What can we offer them, and what can they offer us? I haven’t asked them yet so that I am not very sure about their possible offers. Still, as a human being, I am willing to offer them a few of my ribosomes so that they can produce protein, some enzymes such as RNA polymerase if they want, a part of my ER membrane they can envelop themselves in, Golgi vesicles in case they want to be transported out. If they pirate those from me, we call it a case of coronavirus infection, but if I provide it for them, we could frame it differently.”

Emerged from the contingencies explored by these questions, the following part of the publication contains more specific speculations about viruses forming more intimate and mutualistic relationship with humans, eventually playing a role of currencies and operating the economic system.

“What we use instead of what you call “wallet” is this gland that we’re all born with. It’s an organ that has evolved to accumulate viruses. It also mediates the exchange of viruses through portals on its surface that connect the virus storing tissues to the outside. Shapes and colors of the virus gland are very diverse because they are constantly infected and deformed by the high concentration of virus in it. The more viruses one has in the gland, the splendid the gland will look.

Thus, in this era, goods and services can be purchased with a virus. The transactions can be done consciously through the viral glands, but sometimes unintentionally by coughs, sneezes, touches, and exchanges of bodily fluid. And those unconscious payments are like what you call tax now. Most of the countries have built a system for collecting those free-released viruses for running social services.”

To illustrate this idea clearly, the author constructed a financial talk show called “Money in vivo”, which translates to “Money within bodies”. Four fictional guests, three humans and one bat, from various politico-economic contexts were invited to this talk show. They shared how their ways of living were formed by this interspecies economic infrastructure. Their conversation moderated by the author is documented in the second part of the publication. The talk show portrays a wide range of topic including a dating app which functions as the biggest market for viruses, a massacre of bats done by the humans concerned of letting their wealth fly away. A political party that insists on the state-governed, common ownership of viruses, a policy that provides universal basic income by forming human-bat companionships. 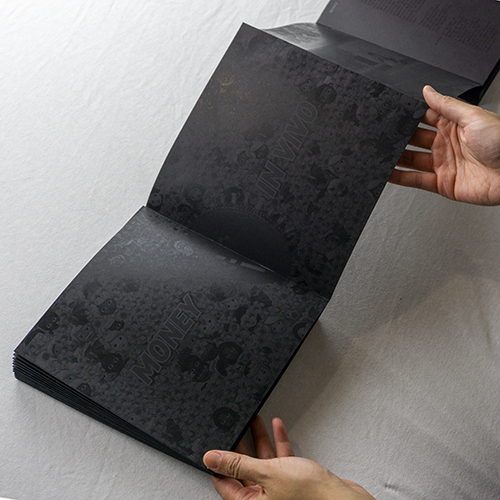 The publication is barely readable for humans since it is printed black on black paper, and only its subtle black textures can be perceived since we are too dependent on light in the “visible” spectrum for visual perception. However, the print is much more recognizable for the nonhumans that can sense beyond that range such as some insects that are sensitive to infrared/ultraviolet light and bats that use ultrasound to navigate and find food. The book is not designed for the convenience of humans, yet with more consideration for it to be perceivable for bats. Bats played an indispensable role in the construction of the book’s narrative, due to their outstanding capacity of storing viruses. The human author intended to react to their contribution by making the book slightly more readable for bats, less readable for humans. 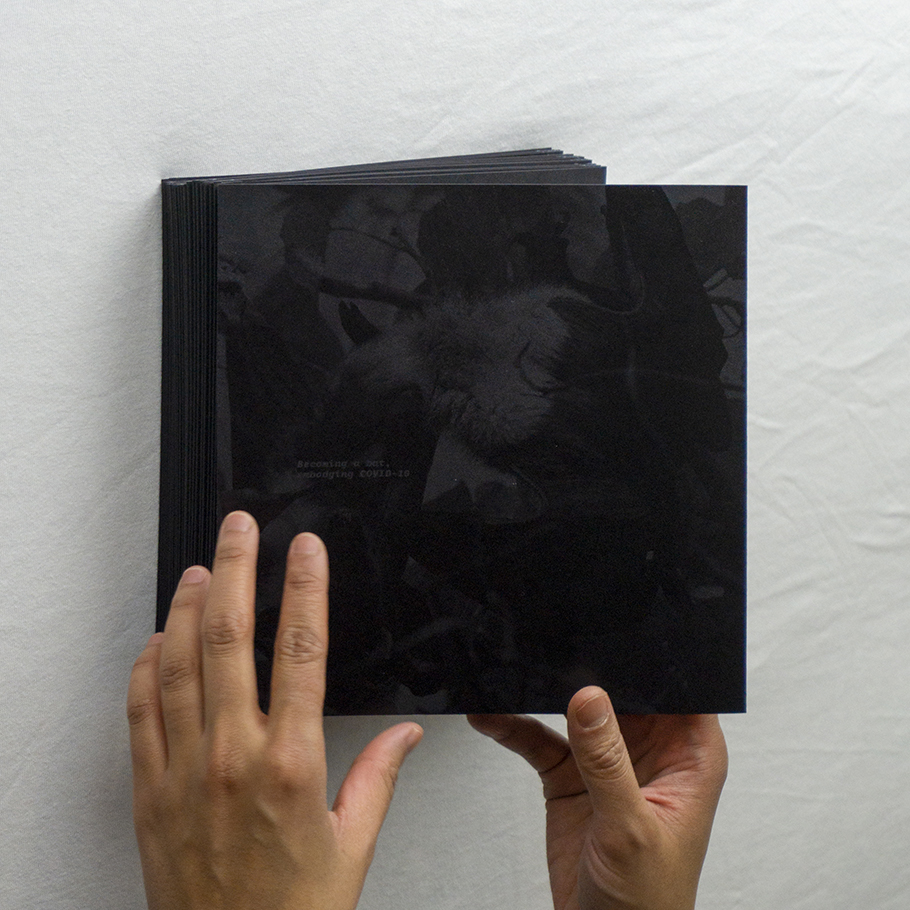