Based on the project with the same title

Featured in Interspecies Futures, At the Center for Book Arts, New York

“Hotel Symbiogenesis: Reimagining symbiosis through speculative craft” is a publication based on a design project with the same title. The passport-sized book works both as an informative documentation of the design project, and as a prop that the readers have to check in with, to enter the context of a hotel room in which the story of a fictional island is being told.

Hotel Symbiogenesis is a collaborative project that rethinks the human-nonhuman animal relationships by questioning how the human species have been valuing animal-derived clothing material. The aim of the investigation was to create alternative mythology, which is not a denial of autonomy and subjectivity of nonhuman animals, specifically concerning the consumption of their skin and fur.

The first major axis of the project was story-writing. During this phase, Noam Youngrak Son, a design-fiction creator based in Eindhoven, created five different fictional animal species and elaborated on their ways of living. The concept of each animal developed into a tale about an ecosystem and eventually became a mythology about an island in which various animal species, including a group of humans, co-operate, co-evolve and withstand the ecological disasters.

The story-building process was accompanied by hands-on speculations. An international group of artisans crafted the skins and furs of the fictional animals using their original techniques. This methodology, which we call Speculative Craft, provided significant insights and inspirations about the tactility of the narrative. During the later stage of the project, the craftspeople began designing the objects using the speculative leathers that they crafted, being in the shoes of the human dwellers of the island. The design process functioned as thought experiments that explored the human perception of the animals, and it was significantly referenced by the story-writing process to depict the human-non-human relationships on the island. The use of animal-derived materials was excluded throughout the entire design process since there was a consensus that it makes no sense to consume products of animal exploitation for the creation of non-anthropocentric mythology. 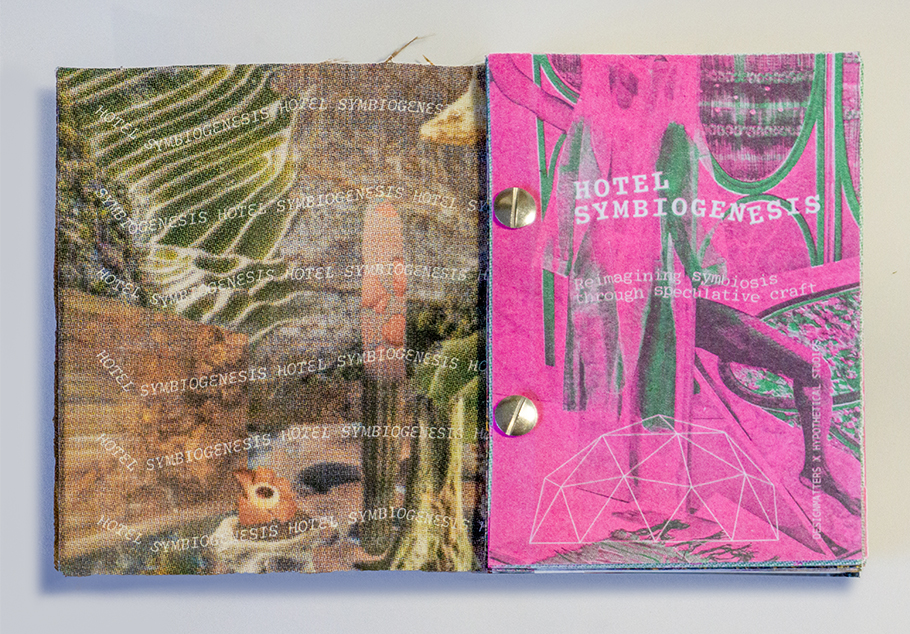 Eventually, Hypothetical Studios constructed a story of an island working like a sympoietic cell that survives the nearly apocalyptic time, operating through the symbiosis of its dwellers. The story was told from the perspectives of six girls. The narrator of each chapter was born shortly after the death of the one from the previous chapter. Their stories depicted how they lived with a particular animal species that have emerged around the period they were alive. This indicated that humans are not exceptional in this relationship. Various rituals of the human residents of the island had co-evolved with the animals in the way that was far from one-directional and exploitative. They made their garments and objects using materials derived from the animals, which gives us a glance at how those humans cohabit with the animals.

During Dutch Design Week 2020(17-25 Oct. 2020), the project was presented as one of the seven exhibitions of “What A Time To Be Alive 2020” program at Temporary Art Center Eindhoven. The exhibition proposed a combination of speculative leathers, objects, and stories by having the theme of a hotel room for the island visitors. The hotel room, which was a geodesic dome, symbolized the island and the biosphere, and a visitor was placed as a temporary dweller in it. The narrative was communicated through sensorial experiences that involve a kinetic light projection on the dome and an audioscape installation surrounding it. Eindhoven-based electronic musician Ko de Beer augmented the sounds of the speculative animals using generative instruments.

“However, it was clearly a human arrogance to overestimate their own capacity. Their ambition to make a perfectly static, self-sustaining biosphere had failed. The atmospheric composition fluctuated, plastic debris from the outside surged in through the island's filter. The islanders had to acknowledge that they are not capable of being a divine controller of the island anymore.”

The first chapter of the publication begins with a story of a kin group which attempted to build a dome-covered island that preserves a fragment of the planet’s biodiversity from the human-made ecological catastrophes. However, they loose their authority on the insular ecosystem soon and admits their position as one of the animal species in the island that is dependent on symbiosis for its survival. Our anthropocentric worldview that is already disturbed by the COVID-19 pandemic is also challenged by the narrative that the book proposes.

“She paused next to a dead fish washed up on the beach. A family of urchins was devouring the corpse, tasting the bodily history of the fish, trying not to forget every single cell of it, embracing its DNA with that of themselves, therefore becoming the fish, or vice versa. She mumbled a question to the urchins. "What species had gone extinct yesterday? What species will go extinct tomorrow?”

The publication concludes with an episode about a species of sea urchins that endocytose and accumulates the DNA of the dead animals in their nucleus. The human narrator of the story witness this post-mass-extinction interspecies mourning. This makes the (human) readers question about the moment that they have to “check out from Hotel Symbiogenesis” as well as their cohabiting species.