A workshop based on this project can be found here. 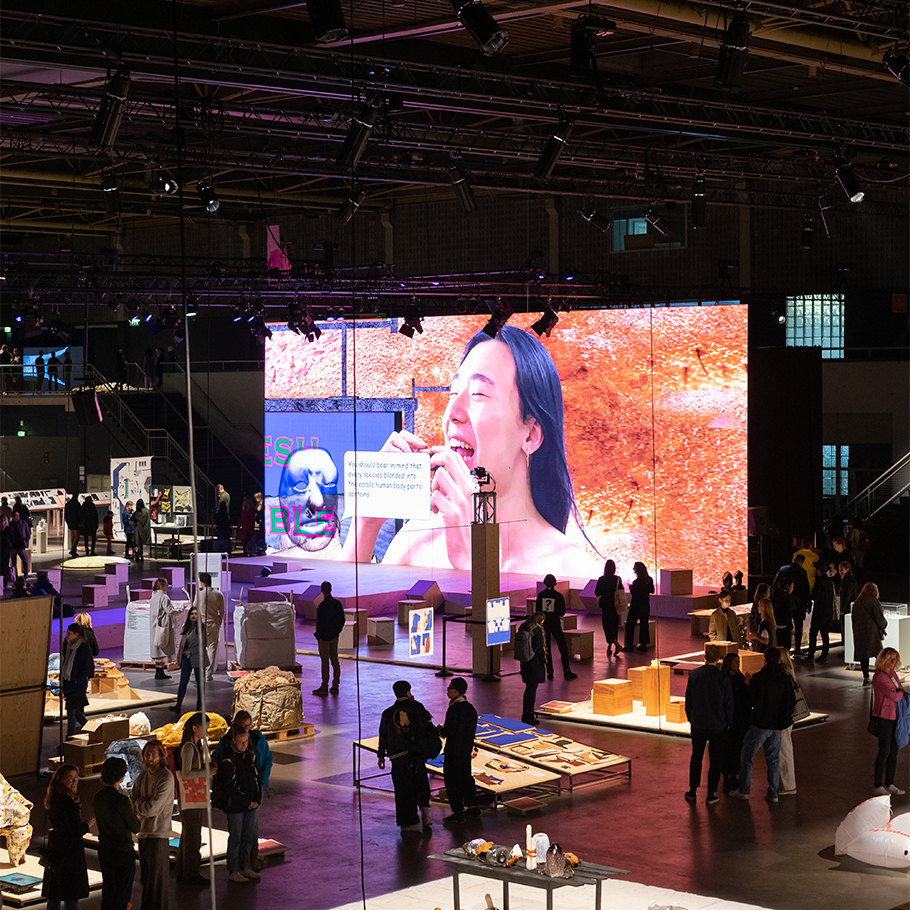 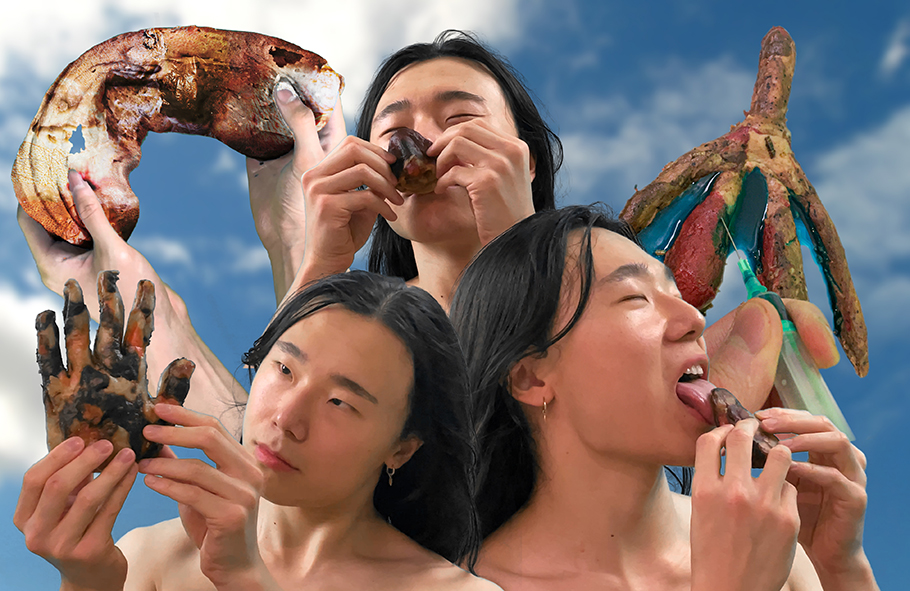 “Yummy Body Truck” is a fictional food truck that sells ‘edible human body parts’. The stall collects samples of organisms found nearby, grinds their flesh into mouldable paste, and reshapes it into forms of human bodies. Different types of flesh can be characterised by factors such as pigmentation, endocrinological condition and toxin accumulation. As the paste is shaped into body parts, those aspects gain more political significance: The pigmentation of brown meat turns into ‘race’, and estrogen residue determines ‘gender’. The truck serves the body parts in a lunchbox, and an instruction video guides visitors on how to see, smell and taste them. The flavours of pigments, hormones and toxins make them more aware of the nuances of the bodies that they eat.

Glass eels, once an abundant food ingredient in Basque, had a sudden and drastic decline in their population in the late eighties due to a reason that is still unknown. As an alternative, one company invented imitated eels in 1991. The imitated eels, looking almost identical to the glass eels, are made of various "cheaper" species of fish ground into a moldable paste. And it is now consumed nationwide. This act of amalgamating various species into a mouldable paste, and forming it into the morphology of another species is very common if you think about it. Namely surimi crab stick, kosher shrimp, vegan hamburger patty, etc.

I extrapolated this observation into a more speculative experiment and came up with this food truck. I named it Yummy Body Truck since it sells “edible human body parts.” The stall collects samples of various organisms and grinds their flesh into a moldable paste, and reshapes it into forms of human bodies. Different types of flesh in the paste can be characterized by the factors such as pigmentation, endocrinological condition, toxin accumulation. Shaping the paste into human body parts is a method to emphasize the political significance of those aspects. At this food truck, the pigmentation of white fish and brown meat turns into “race”, and estrogen residue in beef determines “gender” of the edible human body parts that it forms. The bodies are the products of hybridizing species, race, and gender. Eating those bodies is a statement of embodiment, and becoming a chimera like the mouldable paste. The flavors of pigments, hormones, and toxins from the edible human bodies communicate the ecological and political nuances of the flesh.

Q: The term “imaginative geography” seems to be central to our discussion, both as a metaphor for the dynamics of interpreting the relationship between that which is unknown and the self; but also as Edward Said theorizes it as a post-colonial critical tool to reflect on the constructed nature of our relationship with landscapes that are not immediately familiar to us. This is to say that fiction plays a major role in how we interpret and by extension project power over the environment and the life forms that live within it. We are curious to hear more about your take on the role of critical fiction and social science fiction to undo some of the inherent violences that exist in the mainstream and neo-colonial constructions of the Alien within imagined geographies? On a cosmic scale, what is the power of critical fiction to afford us alternative psychologies of first contact beyond the limits of planet Earth?

A: I want to emphasize that our life is already surrounded and supported by fictions and the intersections of our belief systems. For example, the “fluidic chimera making”, by which I mean, the act of making the imitated eels and crabsticks, is a fictional ritual taking place globally. The dinosaur-shaped chicken nuggets aren’t dinosaurs, and imitated eels don’t taste like eels but we call them eels and consume them as if we’re eating eels. This is a fictional ritual, or perhaps an industrial scale role play.

However, the question that I want to raise by my works is how normative that fiction is, how anthropocentric, capitalist, and colonial it is. For example, the fish paste, which is called “surimi” that is later shaped into imitated eels, shrimps and crabsticks, so forth, is a product of capitalist exploitation - in the sense that it consists of “species of fish with relatively lower commercial value, ground and frozen as soon as they’re caught on fishing vessels”. So the consequence of this “normative fiction” is the cheaper species converging into the paste, and getting reformed into shapes of more “profitable ones”. And it rarely happens the other way around.

And the fiction that I propose is an alternative to these normative narratives. I’m not insisting on this food truck as the most ideal gastronomical future that we can imagine, but more as a tool that reflects on the consumption of flesh and its politics. So in this narrative, we’re no longer the exceptional beings that are only represented by our desires. We also have to put ourselves into this democratic meat grinder, and we have to eat the morphological representations of ourselves. And by doing so, people are finally able to widen their anthropocentric politics into that of interdependencies, connected by the molecules like pigments and hormones and so on.

Q: In her forward to the novel Left Hand of Darkness, Ursula K. Le Guin asserts that “All fiction is metaphor. Science fiction is metaphor. What sets it apart from older forms of fiction seems to be its use of new metaphors, drawn from certain great dominants of our contemporary life—science, all the sciences, and technology, and the relativistic and the historical outlook, among them. Space travel is one of these metaphors; so is an alternative society, an alternative biology; the future is another. The future, in fiction, is a metaphor. A metaphor for what?” Within your own works how do you formulate your ideas and intentions around the metaphor and in what ways does the future serve as a metaphor in your own works and as Le Guin ponders, a metaphor for what?

A: I’d say that the whole world-building that I have here is a scaled-up metaphor of the fact that we’re already pretty much chimera, and our flesh is almost as malleable as the multi-species paste. When your dough is too stiff, you add more water and when your dough tastes too bland, you add more spices, and we’re also doing it with our body all the time, such as hormone replacement therapy for transgenders. Also, our digestive system is a super heavy-duty meat grinder that breaks up organisms into molecular units by using not only mechanical forces but also acids and various enzymes, and more importantly, by the aids of microbes. And those molecules are what construct the bodies that we claim as ours.

And not only in terms of substance but also in terms of information, 8% of the human genome originates from that of retrovirus.

Therefore, what I fictionally constructed is not entirely original because it concretely references the construction of our body. So indeed it’s a metaphor that works in various scales, a molecular scale, the scale of an individual human body, the scale of the food industry, the scale of bigger political agenda.

Excerpt from a discussion with Pejvak